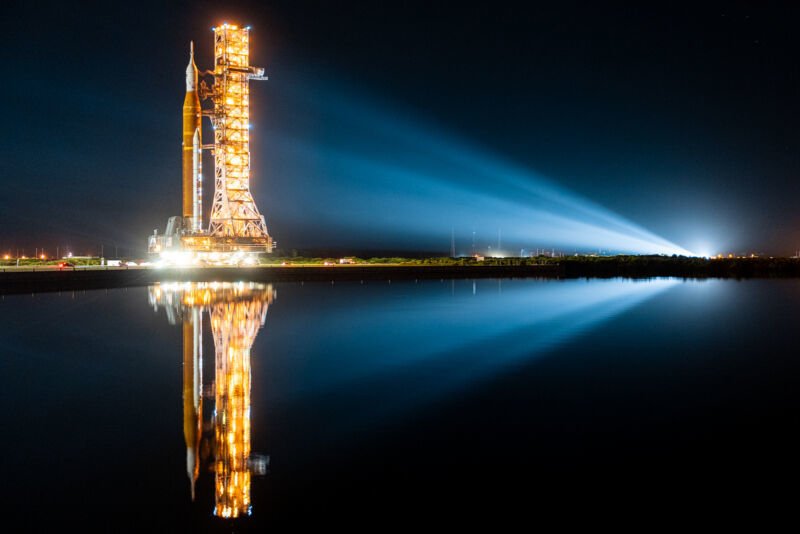 NASA’s Artemis I mission will remain at the launch pad on Florida’s east coast as subtropical storm Nicole crossed the Atlantic Ocean into the state on Monday afternoon.

It has been decided that the Space Launch System rocket and Orion will remain at Launch Pad 39B “based on current forecast data,” the agency said.

However, as Nicole gains power, the dangers to these expensive and bulky vehicles appear to increase. Winds are the biggest threat from tropical systems, according to the space agency. The rocket’s solid rocket boosters are like miniature tanks because of how sturdy they are. However, there are fragile components inside a tropical system that can be easily damaged by flying debris and worn down by the high winds.

Engineer in charge of the SLS rocket, John Blevins, claims it can survive winds of up to 74.1 knots. The nautical mile is the standard unit of measurement for speed on the high seas and in the weather sciences, and 1 knot is the equivalent of that speed. The SLS rocket can survive winds of up to 137 kilometers per hour (85 miles per hour). Gusts of wind are distinct from the winds that persist during a certain time period. These gusts last for only a few seconds, as opposed to the minute-long or longer winds that are more common.

At 10 a.m. Eastern Standard Time on September 26, as Hurricane Ian approached Florida from the opposite side of the state, NASA decided to bring the Artemis I mission inside the Vehicle Assembly Building, where it was being assembled, along with the rocket, the Orion spacecraft stacked atop the rocket, and the mobile launch tower. There was only a 6% likelihood of hurricane-force sustained winds (64 knots or greater) at Kennedy Space Center at the time, as reported by the National Hurricane Center. Such persistent winds would have inevitably included stronger gusts, exceeding Blevins’s threshold.

Only a 4% possibility of such winds existed at Kennedy Space Center on Monday, when NASA declared it would stay at the launch pad as Nicole approached Florida. Therefore, NASA decided to stay at the pad and take a chance. Ironically, wear and tear was a factor in the decision to stay outside.

The Artemis I mission vehicle is subjected to significant wear and tear as it is rolled the four miles between the Vehicle Assembly Building and the launch pad. NASA has a set amount of money available for rollouts as part of the risk calculation for the Artemis I launch vehicle. Since this spring, the rocket has made four trips to the launch pad. Despite denials from NASA itself, a reliable source claims that the space agency is down to its last roll of funding. The rocket won’t necessarily break if it does more orbits; rather, each additional trip would increase the likelihood that some damage will occur.

It’s also possible that NASA just didn’t have time to relocate inside the VAB’s secure facilities. The process of getting the rocket ready to roll back can take several days. Since going back to the previous state would have to be done no later than Tuesday night in order to avoid Nicole’s arrival, it’s possible that it was already too late by Monday. A NASA representative, Rachel Kraft, was evasive when asked if the space agency was forced to stay put on the launch pad. Monday she announced that after reviewing the forecast, the team has decided to keep the rocket at the launch pad.

A worsening outlook for Nicole is an issue for NASA. The National Hurricane Center predicted early Tuesday that Nicole would strengthen from a subtropical to a tropical storm and make landfall on the Florida coast about south of Kennedy Space Center as a Category 1 hurricane. As a result, the comparable probability for hurricane-force winds (at or above the safety limit imposed by NASA for its rocket) have increased to 10%. Because of this, projections were downgraded during Ian.

Though the storm’s continued presence remains a low probability, there are still some causes for concern. The aggregate worth of the rocket and spacecraft is $4.1 billion, and NASA doesn’t have anything on hand to replace them. Since the launch of this mission was initially scheduled for 2017, any more delays would be extremely embarrassing for the space agency and would likely increase the number of people who demand that it switch to using commercial launch vehicles, which are more efficient and cost much less.

Within a tropical system, the issue is compounded by the fact that winds rise with altitude. Predicted surface winds from the National Hurricane Center. According to Blevins, the 60-foot level should expect winds of 74.1 knots. The rocket, however, is far more massive in stature. The SLS rocket is elevated by 47 feet on a moveable launcher deck. The combined height of the rocket and Orion spacecraft is 322 feet, for a grand total of 369 feet.

Previous Post: The solar panels of Cygnus are unable to deploy
Next Post: Lucid, an electric vehicle manufacturer, suffers a quarterly drop in orders